Getting (and Staying) Organized Amid Back-to-School Season

For parents, mid-August and early September mark the glorious return of back-to-school season. It’s also a popular time of year to move, especially for families looking to settle into their new surroundings before that first school bell rings.

While it’s always key to stay organized during a move and beyond, it becomes all the more important when you’re establishing a new routine. So to gain some insight, we talked to home organization experts Cathleen Staley with Simplify and Lindsey Kach with NEAT Method, who shared their thoughts on how to organize to suit the needs of both kids on the go and parents looking to control the chaos.

Edit Down Your Belongings Before You Move

Staley started her business in 2014 with the idea of helping people organize their homes. Little did she know that eight years later, 75 percent of her business would be comprised of moving families.

“Typically, when helping someone with a move, our ideal scenario is starting in the home they’re moving from so we can help them edit down the belongings they take with them,” said Staley. “Moving is expensive, so being mindful of getting rid of things you never use before you land in your new space is important.”

While some only see hassles involved with moving – especially with school-age kids – Staley looks at it as an opportunity. “A move is a blank canvas that allows you to make organization sustainable whether in closets, cupboards, a mudroom or garage.”

Kach says home organization is a simple formula but approaches each client individually. “Each space is different, and every family has their own needs – it’s always up to the client and how they are comfortable approaching their organizational needs,” she said.

She suggests having a method for housing bulky sports equipment and recommends storing seasonal items that aren’t in use. “A garage with industrial shelving, wall grid systems and various stations is a great way to organize and air out equipment that is in use, while basements can be used for out-of-season storage,” Kach said. 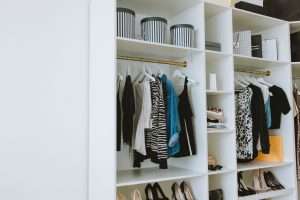 Noting that moving can be filled with emotions and elevated stress levels, Staley said her goal as a professional home organizer and moving concierge is to help alleviate that feeling. In addition to helping pack, unpack and organize, Staley and her team will handle “to-do” items for clients such as calling utility companies, landscapers or even enrolling in a new school district. “We’ve had a lot of success eliminating that overwhelmed feeling that can accompany a move,” said Staley.

As part of Simplify’s services, prior to a move, Staley and her team will also work with real estate agents to help stage a home prior to selling, as well as schedule movers and coordinate the donation of unwanted items. Based in Chicago’s North Shore, Simplify has helped individuals across the country.

NEAT Method has teams throughout the United States and Canada and will also correspond with movers, closet build-out companies, and interior designers to ensure a seamless experience for clients. The company features its own line of high-end organization tools for every room in the house.

For ADA assistance, please email compliance@placester.com. If you experience difficulty in accessing any part of this website, email us, and we will work with you to provide the information.
- 1998 -

Sign Up
Already a User? Sign In
You have been successfully registered
Please check your email.
Go to the homepage
Sorry something went wrong
Please try again.
Try again